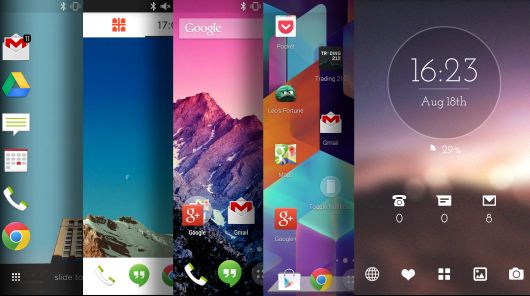 Best thing about Android is its ability to allow users to customise the user interface as they like. Android launchers are a great source to change the user interface and make it adaptable to your likes and dislikes. Android launchers can help you revamp overall look of your device and tweak the apps and home page as you like. Let’s move on to the list of top 5 Android Launchers.

Following list is totally based on my opinion. After looking into many Android launchers, I came up with the list of following launchers. You might disagree with my choice but I can assure you all the launchers listed below are good at their job and they provide you with great tweaks.

It’s one of the most famous Android launcher. It is flexible to great level. Its customization features are spread all over from home screen to dock. You can change the interface as you like. You can get Action Launcher for free but if you pay $3.99 you can upgrade it to pro version. the pro version has some features which are locked in the free version.

Nova offers whole bundle of desktop behaviors and animation options. It has one famous swipe action feature, which allows app to behave in dual way. If you swipe icon of app it will act as a folder and if you will click on it it will act as an app. Nova has great number of custom icons and custom wallpaper from where you can select whichever you like. It has two versions, free one to try the launcher and the prime version which has all the features.

Aviate offers you collection of apps based on their types. There are number of unique features in this launcher. It customizes interface of your phone based on your location, date and time. It also gives you relevant collections from its already existing interfaces named as Spaces. Aviate has great features but it is not as customizeable as the other launchers in the list of top 5 android launchers.

Android power users love this launcher. It has great range of tweaks including icon tray size and scrolling customization. It also offers functions related to home screen behaviour and gesture commands. Its basic version is free but its pro version that allows you you sync between your all android devices costs $4.49.

Although you might think Z launcher is like the other launchers mentioned above but its has few unique features that makes it stand out from the rest of launchers. One is them is that it allows you to assign a character to each app or contact. So in order to bring the specific app or contact, you just have to draw that specific character. If you want to access music player, just draw M on the home screen and it will bring you all the apps which start with M or have M in their name.

It allows you to add widgets to the left most page. Z launcher beta can be very handy, if you have large number of apps in your phone and at times it gets troublesome to locate any specific app in the app drawer. It can be downloaded for free from the link below.

That’s all from my side regarding top 5 android launchers. if you think there should be some other launcher that should exist in this list, let me know in the comments. Also, do try these launchers and drop feedback regarding your experience in the comments below. 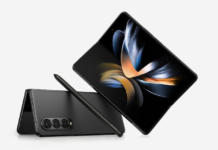 How to recover data from broken Galaxy Z Fold 4